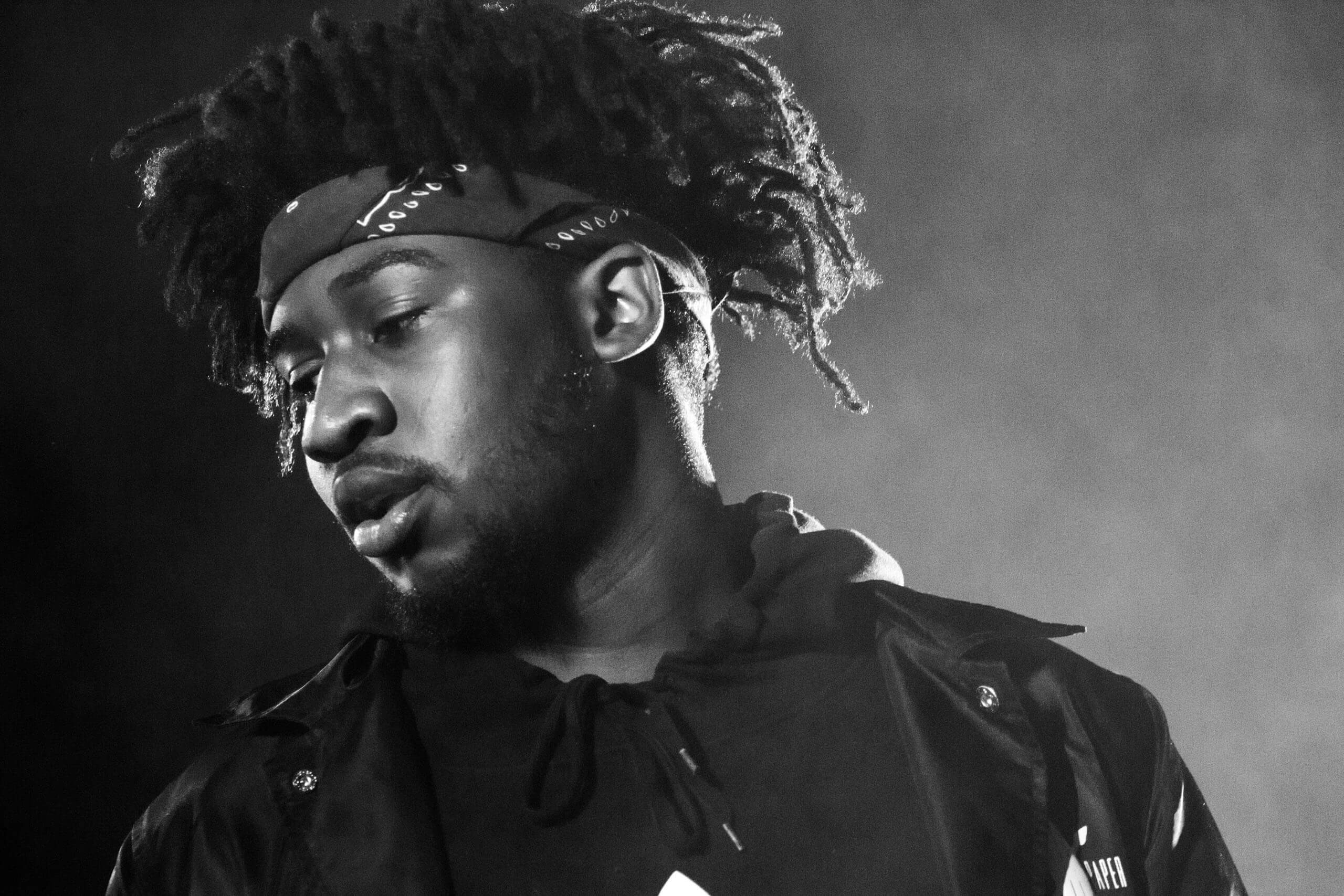 J. Cole’s spiritual brother, British rapper and producer Jay Prince pops up on our radar at the end of 2014. His mellow and soulful sound hasn’t stop to evolve and widen ever since. In 2015, he drops two innovative EPs one after the other: Beautiful Mercy and Befor Our Time. The Londoner comes back in 2016 with Smile Good, a mixtape to drop on October, 21. Like his american counterpart Goldlink, Jay Prince is the kind of multitalented artist who redefines the sound of today, and whose melodious voice has taken hip-hop by storm. The BackPackerz met him a few months ago, just before his incredible show at La Boule Noire in Paris.

A bottle of cognac on the table and a glass of tea in his hand, gospel choirs and Drake songs in his Spotify playlist, one day in London, the next one in LA: Jay Prince knows how to do the splits. All dressed in sportswear and obviously chilling before his gig, the artist opens up about his childhood in Camden, the origins of his singular music, his role as a producer, his past years at university and how he prioritizes music on the same level with food and sleep. The next thing, we were hands up, breaking our necks and singing along to the lyrics of « Goog Right Now », a stand-out track from Beautiful Mercy : « Give a! Damn! How you! Feel! We just! Tryna! Keep it! Real! »

As a 90’s baby, what are your main influences?

Overtime, I listened to a lot of RnB, very low-key music. I was born in the 90’s but mostly grew up in the early 2000’s. I listened to all the Ja Rules and Nellys. I did my homework and listened to Jay Dilla, Slum Village and DJ Premier. I’m a fan of that old school, it was my vibe for a long time. Ultimately, my music comes form the 90’s, to the 2000’s to right now. Outside of music, it’s just my life, family and friends that inspire me.

You first described your sound as mellow-nostalgic hip-hop.

At the time, I was into a lot of boom-bap soulful stuff. I’m also a very chilled-out person, so that’s where the mellowness comes from. But right now, I’m experiencing more. My music doesn’t have to be only mellow or hard. All I care about is to spread a good message and people to enjoy it. As you grow up, life doesn’t come to be as simple as it looks.

Was there a hip-hop scene where you grew up?

Camden Town, East London is where I come from. Newham is the borough. As kids, grime was all we used to listen. Everybody talked about it at school: « Did you here that Wiley? Did you checked that Skepta? That Chipmunk on Tim Westwood’s show? » When I got MTV at home, I got exposed to more music. Eventually hip-hop came along and I started playing music at church.

How did you link up with Soulection?

It was organic and natural. I have friends in London prior to meeting Soulection. When they came and did a tour in London, I connected with them and we kept the relationship. At first, we planned to do nothing special together. Then I ended up touring with them, I was with Iamnobodi and Berlin and I pay them a visit every time I’m in LA.

You split your time between London and L.A. What place inspires you more?

London and L.A. inspire me both. Every time I’m on tour I get to visit new places. Wherever I’m in inspires me right now. Traveling makes me feel good. I just make the best out of every place I go. But there is nowhere like home. Back in London, it’s nice to see people like Stormzy or Little Simz doing good.

What was the mood and concept behind Befor Our Time?

Befor Our Time is inspired by the music that came before me and made me who I am. So much has happened! I had to retrace all the music I came across back from ’93. It also had a double intent: I may listen to stupid songs about drugs to party, but as a human being, I love to teach people things. Nowadays, you get exposed to so much music, but don’t always get the message.

You almost entirely self-produced this project.

Producing is essential, it’s what shapes my sound. Kanye West is still one of my favorites when it comes to samples. Each time he puts out new songs, I’m like: « What’s he gonna do this time? ». I do my research and it inspires me to do more. Of course, Jay Dee flips samples like crazy. J. Cole, who’s one of my favorite rappers, is also a producer. He’s one of the reasons I wanted to do shows, and taught me rappers can be producers. Working with other producers is a good way to learn too.

As a producer, you are the one who pushes the sound forward.

Indeed. Sonically, I push myself to always be more creative and never make the same thing twice. After all, it’s the only way to grow and know where I’m at. People who follow me can relate to my journey. You’ll never here two projects that sound similar.

You recorded your first EPs while finishing your studies.

Gosh, it was a long couple of years ago. Now I finished school and graduated. At university, I worked on Beautiful Mercy and Befor Our Time. Luckily, I studied Music and Media. All I ever did everyday was music, so it kind of helped. Except for the rhyming, that was only for fun. So I had to prioritize. I always put school first and handed my assignments on time. But I made sure to make time for music. The same way you have to eat food and sleep.

Should we expect more music to come out now?

It’s the first year I haven’t done school in my entire life. Now I’m just focusing on music and enjoying it. Recently, I’ve released new songs to refresh people’s mind. You can also expect me to collaborate with more people. No concrete names yet, except from Iamnobodi, who I’ve already worked with. Plus I’m doing SXSW this year, so I’m thrilled right now! I’m happy to be another Londoner representing there.